Living in a world full of convenience created by modern technological advancements, it’s hard to imagine a life without the existence of mobile phones. Man has become somewhat unappreciative of such modern technology, forgetting that it was only 40 years ago that mobile phones weighed a kilo, was almost the size of your head, had only 30 minutes of air time, and took 10 hours to charge the battery. It’s safe to say a lot has changed since the invention of Martin Cooper’s first mobile phone. 1 G: The First Generation Yes, there was a 1G network, and it was analog! The Advanced Mobile Phone System (AMPS) was introduced to North Americans in 1978, bringing mobile phone technology to the masses. In 1983, Motorola released the world’s first commercial mobile phone.

Digital World The subsequent network became digital. The 1990’s saw a huge rise in mobile phone use, with the European development of the GSM standard and the North American CDMA standard. 2G was probably when we all had our first experiences with a mobile phone. 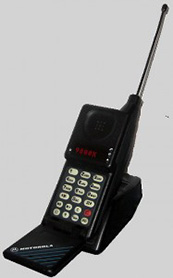 This was the era when the first smartphone was launched by BellSouth Cellular in 1994. The IBM Simon had mobile phone and PDA capabilities and weighed half a kilo. Aside from the usual calling features, this phone could send faxes, emails, and cellular pages.

The Data Age The cell phone as we know it now uses data. The 3G network allowed data transmission, revolutionising the functionality of the mobile phone. Media streaming of radio and TV content became available and browsing the internet became faster with the advanced 3G+ network. Despite the emergence of advanced mobile phone features, the Nokia 1100 gained massive popularity on a global scale, becoming the world’s best-selling phone handset and the world’s best-selling consumer electronics device. Although now discontinued, more than 250 million handsets have been sold since its release in 2003.

Today’s Network The mobile phones and smartphones we are using today use 4G, an all IP network. Compared to its previous generation, 4G provides an even faster browsing experience with mobile ultra-broadband Internet access. With an increasing number of smartphones with GPS and NFC capabilities, applications for the mobile phone have also increased dramatically. The mobile phone. It wakes us up in the morning. It gives us the weather forecast. Tells us when to catch the metro. How to get to places. Where to eat. Becomes a flashlight in darkness and keeps us connected to friends and family. Without it we are lost, so thank you, Mr. Cooper, for inventing the mobile phone 40 years ago.