Kai Bagus is a 47 year-old man from Freiburg, Germany, who has been suffering from HIV since 1998. He is the one in the 3-wheeled Duo on tour to raise HIV and AIDS awareness. ENAiKOON proudly supports Kai on his journey from Freiburg to Vladivostok. We equipped his Duo with our GPS tracking device, the locate-04, allowing followers to track Kai’s tour on inViu web or inViu routes. 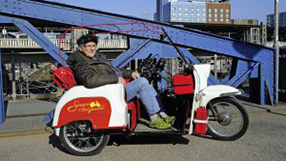 Having extensively worked and volunteered in AIDS prevention education, his goal is to give a positive face to being HIV positive, impart courage to those suffering from HIV, and raise awareness of the disease. The “HIV Aufklärungstour” (HIV Enlightenment Tour) will take Kai through Southern Germany, Austria, Hungary, Romania, Moldova, Ukraine, Russia, and Mongolia over the course of 5 months. 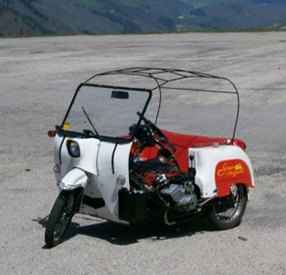 The vehicle used on tour is the Krause Duo 4 2, which is a German 3-wheeled moped created for those with disabilities. The tour kicked off on April 23, 2013 and Kai is currently riding through the Ukraine. Follow his journey in real time, on your Android phone using the inViu routes app or on your browser by logging into ENAiKOON’s inViu web. https://sso.enaikoon.de Email: duoaufreisen@gmail.com Password: Kaibagus2013 Kai regularly posts his inViu location on Facebook and Twitter. Like the Duo auf Reisen Facebook page or follow @kaibagus on Twitter.